His Holiness Karmapa taught recently in Kingston, NY. He answered a few questions at the end of the afternoon. One question dealt with the relationship between science and meditation:

Q. Can neuroscience open a new door for meditation?

A. The benefit of neuroscience for meditators, by which I mean not only Buddhists but everyone interested in meditation, is that neuroscience can actually map and reveal, visually, changes in the brain caused by meditation, which naturally increases our confidence in the practice of meditation. When we meditate, we don’t directly see evidence of a result, which used to not be a problem, but now in the 21st Century we’re all in such a hurry and so lacking time that we have neither the patience nor the time that Jetsun Milarepa did. So it’s easy for us to become discouraged or disheartened by a lack of evidence of improvement. Because neuroscience can literally show the results of meditation practice, it increases one’s confidence. Nevertheless we are just beginning to study this. Neuroscientists are really just beginning the active experimental study of meditators. As the technology develops further and is constantly updated, evidence of the results of meditation, more specific results and so forth, will no doubt increase. 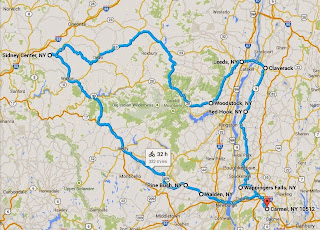 How about a bicycling pilgrimage of the Buddhist temples of the Catskills and the Mid-Hudson Valley?

It'd probably end up being about 400 miles, with plenty of hills. Perhaps ten days would be a reasonable schedule, leaving a bit of time to spend at each temple. The next challenge is to find places to stay. There are a few New York State campgrounds not too far:

Here is a nice map of New York campgrounds: Allstays