Algorithmic methods for musical composition encompass a vast realm. The general pattern is that a person writes a computer program. When the program is executed, its output is a musical score. Such a program might be designed to generate scores that strongly resemble existing works by a particular composer, for example, or works of some specific musical genre. At the other extreme, the goal might be to create compositions quite unlike any previously existing music, compositions that even test the limits of what might be recognized as music, but preserving enough characteristics of conventional music to avoid violating those limits utterly.

Algorithmic composition provides a tool for exploring microtonality in a way that avoids simply duplicating conventional tonal structures, while at the same time maintaining enough recognizable patterning so the result sounds at least a bit like music. The approach I have been exploring constructs a score from the very conventional musical intervals of octaves, fifths, and thirds. The rhythmic aspect is also generally built from simple conventional elements, but in the discussion here the rhythmic aspect is left at the most primitive level. What I want to focus on here is how the simple musical intervals are used to form combinations and sequences of pitches.

In the spring of 1977 I visited the University of Pennsylvania and heard a lecture by Richard Voss on the fractal structure of music. At that time he was calling it a 1/f structure, but that is just one example of a fractal. The key idea is that fluctuations in pitch happen over many different time scales, none of which dominate. Around the same time I was studying phase transitions, such as the transition of a material from a liquid to a gas. Some of these transitions are also characterized by fluctuations at many different scales. So the central idea here is to use a simulation of a phase transition to generate fractal fluctuations, but in pitch rather than e.g. material density.

So how can a computer program simulate a phase transition? I first read about this in 1975 when I was reading Introduction to Phase Transitions and Critical Phenomena by H. Eugene Stanley. The book included some wonderful pictures of two dimension systems at the critical point and their fractal fluctuations, though again the term fractal was not used then. Ever since reading about this, I have been fascinated by how long range order can abruptly emerge out of short range interactions. What is also fascinating is that these phenomena also exhibit universality, which is to say the coarse level behavior is only weakly dependent on the low level details. In other words, a very simple computer program can simulate some very complex behavior!

The multidimensionality of a musical score is not immediately obvious. But on second thought, the musical structure of theme and variation is almost universal. Music consists of phrases that are varied and repeated. The pitch to be played during one statement of a phrase is very closely related to the pitch to be played at a later statement of the phrase in the same position within the phrase.

Harmonic distances are given fixed numerical values which correspond to the energy contributions of microscopic interactions in a physical system. Just as the total energy of a macroscopic physical system, such as a cup of water, consists of the sum of all the microscopic energies from the interactions of the water molecules in the cup, the total energy of a musical score can be computed by adding up all the individual contributions from the harmonic relationships between pitches assigned to neighboring array elements. 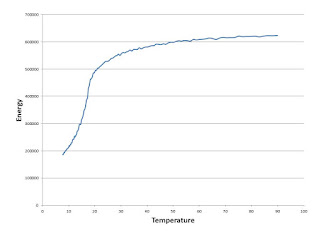 This abrupt drop in energy corresponds to a phase transition and the emergence of long range order. Musically, a tonal center spontaneously arises! As the temperature drops, the score changes from highly disordered to highly ordered. With luck, a sweet spot will emerge where there is enough disorder to make the composition interesting, but enough order so it still makes some sense. This transition from disorder to order can be illustrated by four scores.

The first score, prw691, was built at a temperature of 6.91. From the above energy graph, this is clearly below the transition point. To my ear, this music is too disorderly to make much sense of. But a histogram of pitch class occurrences shows that a tonal center is already becoming clear: 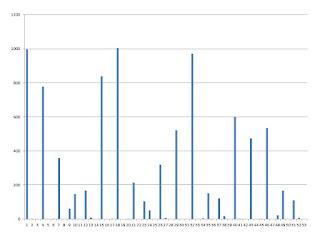 Of the 53 pitch classes in the microtonal system in use here, many do not occur at all, and just few are dominating.

The next score, prw542, is from temperature 5.42. The pitch class histogram now shows a clear tonal center: 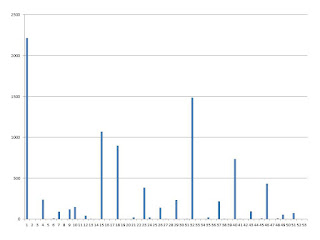 I must confess, the tonal center being around the pitch class 0 makes me suspect that there is a bug somewhere in my code. A very slight consistent bias to any particular pitch class will strongly bias the emergence of the tonal center to land on the preferred pitch class. I am still trying to find out how my code is creating a bias. The fact that a clear phase transition emerges does seem to indicate, though, that this bias is not too strong. In any case, despite the tonal center's clear presence in the pitch class histogram, this score still sounds overly disordered to my ear.

The next score, prw392, sounds close to the sweet spot. Perhaps a slightly higher temperature than 3.92 would be a bit better. Still, this score sounds interesting to me, despite the highly dominant tonal center shown in the pitch class histogram: 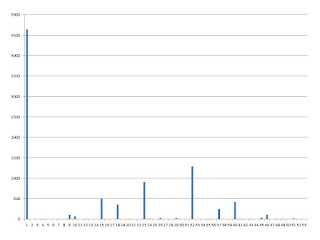 The final score, prw246, from temperature 2.46, does sound too orderly to be interesting enough. The total number of array elements in this structure is 8748. Of these, prw246 has assigned 8221 to pitch class 0: 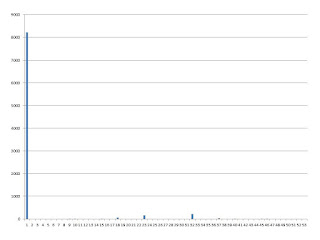