The long-term balance corresponds roughly to altitude in the flight power curve model, while the short-term balance corresponds roughly to speed. One good flight strategy is to stay at a high enough altitude that recovery is possible from a stall. More altitude makes it possible to recover even from a series of stalls. But ultimately altitude is limited by the reduced air pressure. In a real economic situation there is a similar problem. The more one invests, the more one is pushed out on the risk-return frontier. The easy pickings are exhausted.

To model such limits, I tweaked the structure of my simple model. When the long-term balance is low, it earns a reliable 5 percent. But as the balance grows, there is an increasing probability of a smaller return, to the point where it becomes possible to lose up to 15 percent of the balance in a single step. So the average return gradually declines, as the long-term balance increases, from 5 percent to -5 percent.

Here are four different runs, all with the same threshold. Most likely there are smarter strategies that can outperform this simple threshold strategy. But this new model does seem to be more realistic. 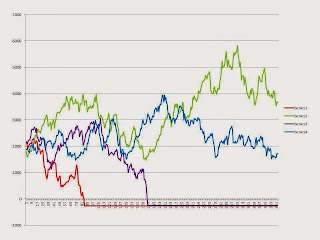