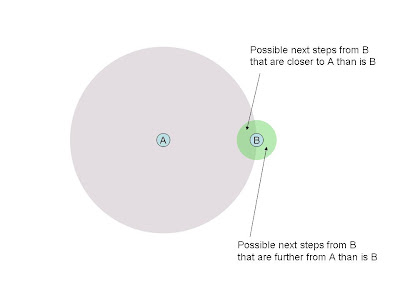 A picture might help help clarify the idea about random walks in multidimensional spaces. Here A is some state of affairs in the past, and B is the present state of affairs. There is a region around B that represents the possible states of affairs some relatively short time in the future. In two (or more) dimensions, most of these next states are further from A than is B. If the direction of the next steps we actually take is purely random, we will most likely end up moving further away from A. I.e. a tendency to move further and further from the way things were in the past does not imply any consistent direction of movement.
Posted by JimK at 10:33 AM No comments:

Science and technology seem to be the paradigms of progress. Whether other institutions will advance to ever greater levels of excellence and accomplishment, by whatever measure, doubt seems not to be out of place. But how can science and technology ever go backwards?
The trajectory we've traced through past time does have a directed one dimensional appearance. Surely there is just one set of events that actually happened in e.g. 1752 and some other actual events in 1753 and all the events of 1753 happened after those in 1752. Time advances forward inevitably, therefore progress is inevitable - temporal progress, at the least. The twentieth century did a good enough job teaching us that society in general needn't progress with time. But it also brought us from light bulbs to cell phones - and advances in the nineteenth century were similarly dramatic. How can the twenty first not continue the trend?
This apparent trend is an illusion. Looking back from the great accomplishments of our day, one can find tiny seeds fifty and one hundred years ago from which they have grown. But many other seeds from those past times failed to grow. Many technologies that were thriving at that time have since disappeared. For the most part, these are technologies that would serve little purpose in our time, so their disappearance is small loss. But this kind of pattern starts to look more like a random walk, rather than movement in any consistent direction. One can look further and further back in time and see that we have moved ever greater distances from those earlier states of affairs. But... just because we are moving further and further from the past, doesn't imply that there is any correlation between the direction of the next step and the directions of any past step.
Consider the way distance works in a multidimensional space. Let A be one point, representing a past state of affairs. Let B be another point, the present state of affairs, some considerable distance from A. Now look at a small sphere or ball around B, representing possible states some relatively short time in the future. Most of that sphere or ball will be further from A than B is. The higher the dimensionality, the greater the fraction of the sphere that is further from A. That is, purely random movement will most often lead to states more and more different than past states. This appearance of a trend of increasing difference does not imply movement in any consistent direction.
Of course, movement in science and technology is hardly random. Nor is it predetermined and inevitable. How social institutions such as these steer themselves or are steered, somehow through the collective actions of large numbers of persons along with happy and sad accidents of equipment behavior etc., that is a huge tangle, surely beyond any ultimate resolution. But to realize that multiple paths are possible and that our actions are crucially consequential in determining which path we actually take, this is the central purpose of my exploration here.
The range of possibilities has a hierarchical structure. At a small scale, any individual researcher is confronted daily with choices about how to proceed - which tests to perform to diagnose some equipment malfunction, etc. At a larger scale, a research team needs to choose which research projects to pursue. At a very large scale, society needs to decide what kind of scientific and technological institutions to permit and support. In all these cases, the menu of options that presents itself is not likely to be the menu one would most like to see. There are practical steps that one can take at any given time, but they generally will bring surprising results - pleasant and unpleasant.
We seem to be caught in a trend of increasing financial constraints. Maybe this will turn itself around soon, but maybe not. What kind of science might work best on a tight budget? Maybe we need to constrain ourselves to funding the least risky projects? Or maybe this is exactly the time to be planting many small seeds. Risk evaluation is itself inherently risky! We may not want to run the risk of putting all our eggs in a basket that we think we know is safe!
Posted by JimK at 7:21 AM No comments: