I continue my wandering in the vast world of musical tuning...

One of the first tuning calculations I performed was in 1976. I wrote a simple formula to give scores for possible tunings, to look for good ones. My idea was that a simple calculus-based optimization would yield an excellent result. I soon learned that this formula was not a matter of simple calculus. Now I have returned to evaluating tunings, with a simpler scoring forumula and simpler tunings. Still, a simple calculus optimization is not going to work with a graph like: 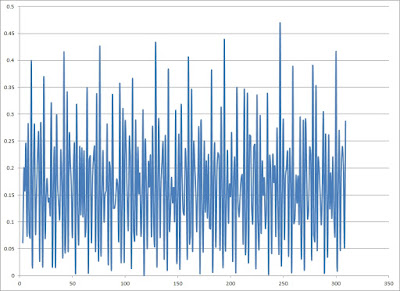 But here I am just looking at dividing octaves into some whole number of equal parts, so I can just sort the possibilities to see which are the best: 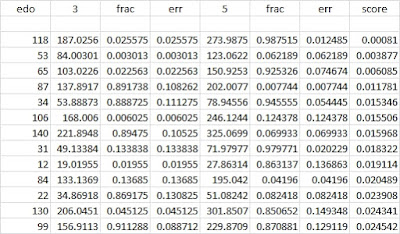 Here the number of steps in an octave is the column on the left, and the score is on the right. The score is based on how well the tuning approximates the exact harmonics 3 and 5.

The tunings 118edo, 87edo, and 53edo are ones I had worked with already. I had never given thought to 34edo, but there it is on the table! So I thought I should give it a try!

Another key feature of tunings like these is the commas that they temper. A Tonnetz diagram should help: 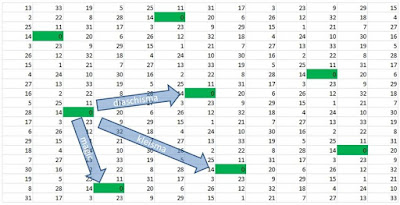 The Tonnetz diagram helps show how this works. Moving from any square to the square above it, that is moving by a major third (plus any number of octaves). In 34edo, a major third is 11 microsteps. Similarly, moving to the right one square is moving a perfect fifth, which is 20 steps. The part of the diagram I show isn't enough to see directly that e.g. by continuing to move by perfect fifths one will eventually circle back to the original pitch class. 20 and 34 have a common divisor 2, so 34 has two seperate circles of fifths, each 17 steps long: one circle for the even-numbered pitch classes, and one circle for the odd-numbered pitch classes.

But the Tonnetz diagram makes it clear that that are many other ways to move in harmonic space and end up back where you started. Intervals in 34edo are near approximations to just-tuned intervals: that's what my scoring formula was measuring. If one were to wander in some direction in just-tuned space, one would never return to the same pitch class except by undoing all the steps one had taken, though perhaps in a different order. Just-tuning requires, or provides, an infinite number of pitch classes. But if the 34edo intervals are close to the just-tuned ones, when 34edo reaches the same 34edo pitch class, the matching just-tuned movement must have reached some just-tuned pitch class quite close to 1:1. Such a just-tuned pitch class is known as a comma. A tempered tuning like 34edo is said to temper a comma when the harmonic movement that would result in that comma in just tuning instead, in the tempered tuning, returns to the same pitch class. In the Tonnetz diagram I have given the common names for the main commas tempered by 34edo.

I use algorithmic composition to explore alternate tunings. I can coax the algorithm in various ways to loop through, or pump, one or more commas tempered by a tuning. Here's a diaschisma pump in 34edo.

Studying the diaschisma a bit more, I realized that a nice 12 pitch class subset can be used to tune a conventional piano: 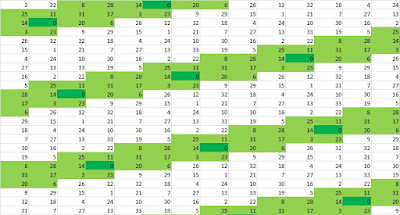 These pitches can be assigned to piano keys: 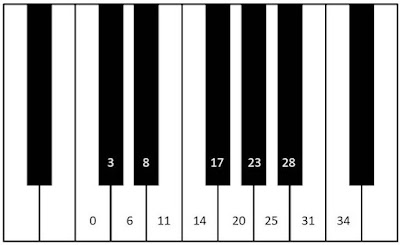 The main advantage of such a tuning is that some intervals are closer to their precise just tuning values than e.g. conventional 12edo. From the tuning goodness score table at the top of this post, one can see that 34edo has much better major thirds than does 12edo, while the perfect fifths are significantly worse. In that way, 34edo is similar to a meantone tuning like 31edo, also in the table. But then again, tempered commas are actually a compositional resource. Each tuning creates its own opportunities for making music.

That said, it's interesting to hear what a conventional composition sounds like in an unconventional tuning. This is a minuet by Telemann that I had put into software some years back, so it was easy to convert the tuning. I should note: conventional 12edo was not conventional in Telemann's time. I have no idea what he would have used: in those days, folks were quite creative in finding fresh ways to manage the compromises involved in tuning. I'd like to think that Telemann wouldn't object: Telemann minuet in 34edo diaschismic tuning.

Many high-end digital keyboards allow individual control of the tuning of each pitch class. Here is a tuning table for anyone who'd like to try this:

The Conduct of Emptiness

Buddhism and science share the view that much suffering is due to mistaken ideas about the way the world works, and that much suffering can be avoided by replacing those mistaken ideas with ones that better fit the world. The biggest difference between Buddhism and science is their general strategies for avoiding suffering. Shantideva’s analogy captures the difference. Walking barefoot over rocky terrain is painful. The scientific solution, or at least the technological solution, is to pave a smooth road. The Buddhist solution is to wear shoes. The focus of science is outward; the focus of Buddhism is inward. The more accurate understanding of the world provided by science allows engineers to change the world into a less painful configuration. The understanding of mind taught by the Buddha enables Buddhists to train their minds to respond to the world in less painful ways.

The Buddhist view of the nature of reality is not monolithic. In general, the idea is that the coarse objects of our everyday perception and interpretation, the individual persons and things of our everyday world, do not exist in the cleanly defined discrete way that they appear to. For example, careful examination of a cart reveals that it is just an arrangement of parts such as wheels, an axle, etc. As such analysis is pursued ever deeper, is there some natural stopping point, where analysis reveals some elementary discrete objects that cannot be analyzed any further? Over the millennia of the development of Buddhism, a variety of doctrines have emerged. The Madhyamika school, pioneered by Nagarjuna but also followed by Shantideva, holds that no such elementary objects can exist. Whatever object appears in our investigations of the world, that object can be further analyzed to understand how it arises from the interplay of other objects. Emptiness is a term used to refer to the way objects are never discrete, elementary, and unanalyzable. Interdependent origination is a term used to refer to the way objects arise from the interplay of other objects.

The distinction between the two ways to reduce suffering, changing the world versus changing the mind: this distinction is not so clear and discrete either. Effective engineering requires an understanding of the human mind. For example, designing safe and efficient roadways requires an understanding of how the human perceptual and interpretive systems will parse the various road markings. Mind and world are intimately coupled; indeed, each gives rise to the other: they co-emerge. The Buddhist path of mental transformation is not separate from actions in the world. Ethical and compassionate conduct is one of the cornerstones of the path, along with view and meditation. Cultivating the view of emptiness and interdependent origination is a classic meditation exercise. The view comes alive as it is reflected in one’s conduct.

There are classical teaching stories that illustrate the need for keeping our interpretations tentative. One story is about a farmer who finds a beautiful horse and the events that ensue. What first seems like good fortune then turns out to be misfortune; what first seems like misfortune turns out to be good fortune. Things are never quite what they seem.

A further channel for living the view of emptiness and interdependent origination is through community, through collective exploration. So much of our common conversation revolves around who is right and who is wrong. More productive discussion can happen when we understand that no one is altogether right and no one is altogether wrong. Each interpretation of a situation provides another perspective. We may need to take action, and so need to resolve a coherent interpretation on which to base that action. But we can work to act in a way that keeps open opportunities to learn more, for our interpretation to evolve, rather than closing down our perceptions in order to stabilize our interpretation, our actions reinforcing our justifications.