Somehow I am rather fascinated by how bicycle tires work. Probably one reason is that I just enjoy how things that seem very simple before being analyzed, turn out to be rather complicated as they are studied more carefully.

A tire on a bicycle or car etc. must support the vehicle, which involves forces parallel to the radius of the wheel, and also transmit tangential forces from engine torque or braking. To support the vehicle, the tire must push down on the ground with its share of the weight of the vehicle, and also push up on the rim with the same force. If one lifts the vehicle up off the wheels and then gradually lowers it back onto the wheels, the tires will deform from a uniform round shape to a flattened shape.

How much deformation will occur, how deeply will the vehicle sink after the tires first touch the ground until the tires are supporting all the weight? This amount of deformation must satisfy two conditions: the area of the resulting contact patch, times the air pressure inside the tire, must combine to produce sufficient force against the ground to support the vehicles weight. But the deformation must also provide enough net force against the rim to support that same weight, as outlined in Jobst Brandt's article.

At first thought, the deformation looks like a single variable, determined by the height of the rim off the ground. The lower the rim, the more the tire is deformed. But how can a single variable satisfy two conditions, without an impossibly unlikely stroke of luck?

Thinking about this a bit more, it seems that at a given height of the rim off the ground, a range of tire shapes is possible. This range of shapes provides the flexibility for both constraints to be satisfied.

In the following diagram, C is the half width of the tire carcass, i.e. half the distance from bead to bead along the carcass. Where the carcass is not touching the ground it is assumed to have a circular shape. This is still a very simplified picture, because there will be interactions between the neighboring cross-sections of the tire. A very large radius of curvature will permit a large contact patch, increasing the force of the tire against the ground but reducing the lift of the rim. A small radius of curvature will reduce the contact patch, so the force of the tire against the ground is smaller but the lift of the rim is greater. The actual shape should be where the two forces are equal. 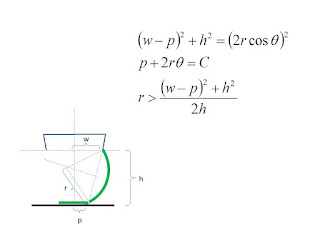