The Mind in Science

The last ten years or so have seen a variety of efforts by scientists to forge at least a preliminary survey of a realm both intimate and elusive, the mind. Of course the study of the mind is hardly a new thing, but results haven’t seemed so very solid. Perhaps now, though, with the convergence of sophisticated computational models, non-invasive dynamic physiological measurements, etc., perhaps finally now we have built up a critical mass of tools and can make substantial headway.

At the outset though there is a semantic difficulty. For each of us, there is one mind that we have a special relationship with, viz. our own mind. That I have a mind is axiomatic, or even more fundamental than axiomatic. Without a mind I could not assert any axioms. The minds of others, those are much more problematic. It seems natural enough to assert that other people have minds too. That seems exactly axiomatic, as basic as 1+1=2. But what other people have minds exactly? Does a person in a coma have a mind? Do dolphins have minds? It is a bit difficult to be too confident about the exact scope of this axiom when looking back in history one can see quite dramatic shifts.

A different approach to this study would be to recognize that mind is in fact the subject that experiences the world, rather than any particular object of experience. It seems rather absurd to imagine some scientist in a laboratory poring over megabytes of measurements and computations and analyses and then exclaiming, “Aha! There it is! The object we have been searching for! The mind!” Certainly it can and does happen that new understandings arise of the way perceptions and actions are linked in animals, including humans. But somehow… each of us knows without question that… perhaps everyone else in the world is a very sophisticated robot, but I myself am not! I cannot prove it to you any more than you can prove it to me, but I know it for myself just as you know it for yourself. And this fact, not a fact of experience but the very fact of experiencing itself, this is the mind both intimate and elusive, that remains untouched as an object of research. It is, instead, always the subject that performs research!

But this perspective, while it does close down one avenue of investigation, actually opens up a new avenue. And, just as the development of new sophisticated computational and neurophysiological instruments held out great promise, perhaps this alternate avenue is also timely in a sort of critical accumulation way.

One way to work with this characteristic is from a social science perspective. A scientist’s notebook is like recording of phone conversations between politicians or like the hunting rituals of hunter-gatherer tribesmen. But this again loses the quality of mind as the subject that experiences. It just turns scientists into objects. That may be a fertile line of research, but not the one being pursued here.

The scientific mind is not merely one that records actions and observations. The scientific mind investigates some phenomena, organizing observations into hypothetical patterns and then acting to extend the range of experience to test the validity of those hypotheses. Surely this sort of learning by trial and error is common to every sort of mind, but the scientific mind is particularly self-conscious about methodology, about possible sources of error and strategies to uncover and correct those errors.

Nowadays science has become extremely powerful in our world. More and more of our basic way of living is structured by scientific hypotheses that have become institutionalized and industrialized. With the stakes so high, we have begun to see ever more clearly one of the central features of the mind, the connection between desire and delusion. We see what we want to see. Exactly how the deliberate methodology of scientific investigation falls prey to this ancient pattern…. right there is the golden opportunity of our time! The scientific mind, being deliberate and public, is peculiarly amenable to observation and analysis. The crucial role of science exposes the potential for bias and makes it urgent that we understand that bias. This is the critical accumulation that makes the investigation of the mind in science possible and necessary at the same time.

Covariant science opens up multiple frontiers. When we are only interesting in discovering how the world works, it makes sense to use the most powerful instruments and exhaustive methodology possible. This approach should give the most accurate and precise results. But if we are interested in how results vary across different methodologies, then we need to explore a wide range of approaches. When doing science requires powerful instruments, only institutions with large budgets can engage in science. Covariant science, in contrast, makes room for even the most economical science. How does budget affect results? That is a covariant investigation!

Science has become restricted to a professional elite, supported by powerful institutions. This has not only introduced a powerful source of bias, it has also seeded a widening distrust of scientific results. It just won’t work for this elite to insist with ever greater vehemence, “Trust us!” Concentrations of power bring corruption, a pattern that science is not immune from. The solution to corruption is always the diffusion of power. Science, if it is to retain its original courage and vitality, speaking truth without regard to established dogma, must work to diffuse its power, must work constantly to fight that self-reinforcing cycle of power and corruption, desire and delusion.

Covariant science has the potential to be one powerful method to dissipating the forces that escalate elitism. If the quest shifts from discovering the ultimate structure of reality at any cost, to exploring the mutual relationship between appearances and the mind that perceives them, the exploration becomes fruitful at any scale, on any budget. The question is not so much, “How many stars does the globular cluster of the Pleiades hold?” but instead, “How many stars can I see in the Pleiades, as a function of my viewing protocol?” Look directly at the cluster with the naked eye, then look again but indirectly, off a bit to the side! Look in town, then look again from a meadow away from town lights. Look when the moon is out, look when the moon is hidden! What a vast world we live in!

Often enough, individuals and groups face decisions with grave consequences. An individual might be suffering from some challenging physical symptoms where drastic medical procedures are called for, and needs to decide which procedure is most likely to have the best outcome. The residents of a large region might be weighing the option of keeping a dam in placing or tearing it down. The decision might still be difficult even with perfect foreknowledge of the consequences of each option, but in ignorance of the consequences the decision is blind and the worst option becomes all too likely.

Typically each option will come with advocates who predict excellent outcomes for the option they espouse, while the advocates of other options will disagree with those predictions. Such disagreement is quite common. We need ways to evaluate predictions, to evaluate the arguments used to justify such predictions. We might want to compare the strengths of two opposing arguments. But if we can find ways to evaluate the strength of a single argument, then those can be used as grounds for comparisons.

In general an argument that action A will have consequence B should be based on prior experience with similar situations and similar actions. So the strength of the argument is based on the extent of such prior experience and how one builds the bridge from those past situations to the situation at hand.

Nowadays we have a marvelous systematic and institutionalized way of finding patterns that let us predict the consequences of actions: science. Science effectively addresses both these requirements of strong predictions. Science deliberately works to extend the range of experience, constantly exploring new realms. Science also constantly refines the theoretical connections that organize this mass of experience into a coherent framework. Science is a process that constantly improves the reliability of our knowledge of the world.

A particular prediction about the consequences of some action might well be characterized as scientific, but this does not imply that the prediction is particularly reliable, or any more reliable than some less scientific prediction.

Suppose, for example, that I would like to prepare dinner for a friend. Perhaps I have cooked a particular recipe for my friend on several prior occasions, with uniformly positive results. If I decide to cook this recipe again, it’s reasonable to expect similar positive results. Such a strategy could hardly be called scientific, given that it has probably been applied successfully for millennia, long before folks like Galileo and Newton who ushered in the Scientific Revolution.

On the other hand, suppose I find a scientific journal at the library and read a report that a common chemical constituent of many positively received meals is X. Supposing I have access to a bottle of X, I decide to reproduce the experimental procedures followed in the report and perhaps add chemical X to some plain biscuits and then serve these to my friend. I think it is not too unreasonable to claim that, however scientific this might seem, it is not a very reliable way to prepare a pleasing meal.

While science is, indeed, a process that improves the reliability of our knowledge of the world, for a prediction to be scientific is not the same as for it to be reliable. Even when a scientific prediction is the most reliable one we have, it still might not be very reliable. Because science is always extending the frontiers of our experience, there are regions in which we have very little experience. In those regions, scientific predictions may be the best ones we have, but they may still be very unreliable, i.e. the probability may be very high that the predictive framework will soon be revised as more experience is gathered.

One the other hand, most human experience is a natural evolution of the very complex interwoven network of human society, our local ecology, climate, etc. Doing science requires some level of repeatability, regularity, control, and precision. Much of our experience does not lend itself well at all to scientific analysis. Humans survived quite successfully for a hundred thousand years or more without any science to guide their actions, and other animals continue to live without science. Our ways of deciding how to act have evolved along with all the other facets of our being, and through that evolution have become well enough adapted to our environment that they are reasonably reliable much of the time. When we are acting in situations that are very much like those we and our forebearers have commonly experienced, our common sense pre-scientific predictions will generally be quite reliable. 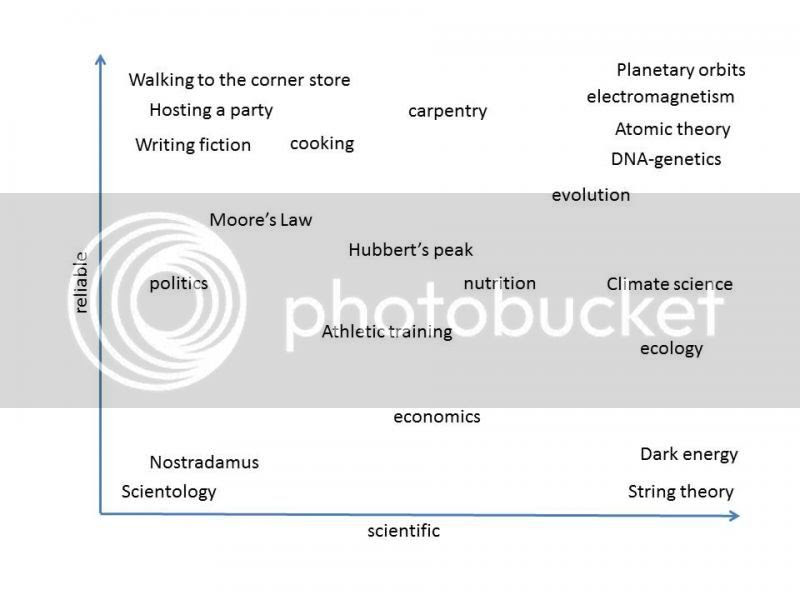