Ran Prieur posted an interesting interview with Kevin Kelly. What really caught my attention was a statement by Kelly:

This brings out strongly for me the fundamental topic of emptiness and interdependent origination, and perhaps more fundamentally the topic of karma. I expect that Kelly appreciates the superficial absurdity of his statement, that humans cannot direct technology. Modern science has had some spectacular success in accepting some absurdity like this and following its implications to discover some very surprising facets of the world. Einstein's Theory of Special Relativity is probably the paradigmatic instance. Here Kelly follows the idea that technology is not directed by humans to the further notion that technology has become a seventh kingdom of life, alongside Plants, Animals, Fungi, etc. This is certainly a stimulating vision but it can be misleading too.

Clearly modern technology is a massive global collective activity and there is little that any single individual can do to direct its evolution. This, of course, is not unique to technology. Humans are social animals with extraordinarily complex patterns of cooperative behavior. Politics would be another primary example. Can human beings direct their own methods of conflict resolution away from violence and war and toward some more constructive approach? What sense does it make to talk of any group of humans or of humanity as a whole directing anything at all or indeed performing any action at all.?

Kelly asks us to imagine rewinding and rerunning history, like a laboratory experiment. This underscores the connection to the general puzzle of free will. Not only is it problematic to understand what it means to speak of a collective action, it is just a deep a problem to understand the nature of individual action. But look again at how the puzzle arises, where we rewind and rerun history. Here is an action that stands outside the history that is being rewound and rerun. Agency and free will belong properly to the subject, determinacy belongs to the object, or, where there is indeterminacy, that indeterminacy is attributed to chance. When a person keeps shifting perspective, looking ever more deeply within to find their own mind, the root of their agency, the failure to finally isolate subjectivity as an object is not due to the subject somehow being illusory in comparison to the reality of the object, but to the fundamental structure of conceptuality, the duality of subject and object.

There is indeed value to the kind of courage that can follow subtle clues, like the problem of the behavior of light in a moving frame of reference, to surprising conclusions, like the relativity of a relationship as basic as simultaneity. If the subject is not a contingent object but instead the mirror of the object in a duality that gives rise to both, then free will is not mere raw material to be incorporated into some technological system but a perspective that defines technology. Do bees make bee hives or are bees and bee hives together a system to be managed by bee keepers? This is a question of perspective, not one to be answered by accumulating data.

Our identity is so deeply enmeshed within our technology. We are the drivers of our automobiles, we are the readers and writers of our blogs and text messages. To see our technology as impermanent, as arising through causes and conditions, is to see ourselves as impermanent arisings. Not only do we have the power and responsibility to direct our technology, we have that same power and responsibility to create ourselves. To treat technology as inevitable is to deny our potential, a retreat from courage that can hide only temporarily and superficially from the deep currents of impermanence and interdependence. Waking up to the truth of our vastness is not a trivial matter but a process that begins with a choice, the choice to recognize that what we do, what we decide, makes a real and profound difference.

The recent announcement by JP Morgan that they had lost 2 billion dollars through shoddy hedging trades has brought up again the question of how to regulate banks, to prevent them from gambling with public money. Given the important role of banking in the national and world economy, the trust placed in them by the public, and the government's backing of this trust, it seems clear enough to me that banking regulation is important. On the other hand, life is inherently risky. It is not feasible to demand that banks avoid all risk. Banking operations will inevitably involve risk management rather than risk avoidance. What's the difference between risk management and gambling? Surely regulation ought to constrain the sorts of risk taking that is acceptable by banks. But it doesn't appear to be a simple matter, to draw a clear line with only acceptable strategies on one side and only unacceptable strategies on the other.

The mathematical tool that displays most clearly a risk management strategy is a probability distribution. A bank will take the money it holds and invest it in various ways. It can hold currency, or loan the money to customers, or buy treasury bonds, or any number of other ways to try to make money. At the simplest level, a bank should put money into whatever has the best return. If a loan returns 8% while a treasury bond returns only 2%, it surely makes better sense to loan out money rather than buying treasury bonds. On the other hand, it happens all too often that borrowers default. The expected 8% return can turn into a 30% loss. Perhaps the greater safety of treasury bonds outweighs the lesser return. Of course, with enough loans, probably most of them will be paid back and only a few will default.

Somehow a bank needs to estimate with a reasonable degree of accuracy the probabilities of the various possible returns of the various possible investments. One source of risk is simple ignorance, the unknown unknowns. A bank needs to hire the experts who can make accurate estimates, avoid investments where such expertise is unavailable, and keep a watchful eye that the experts don't shy away from too many good new ideas or become overconfident about too many bad old ideas. 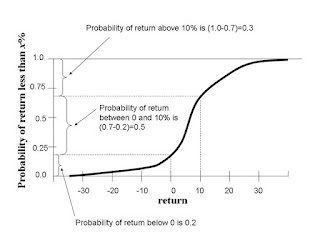 The most attractive sort of shift is a pure win: 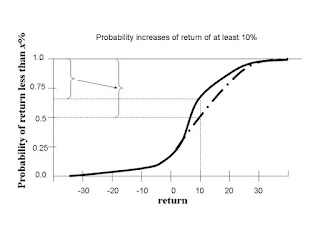 Generally, of course, one is faced with more difficult decisions. A typical investment might add some potential for losses, but more likely will bring improved returns: 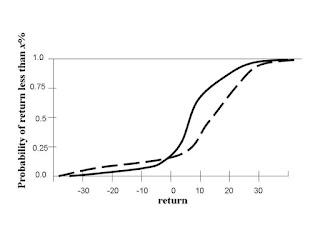 Another type of investment that often, though not always, make good sense is some kind of insurance. Insurance will reduce the probability of large losses, at the price of smaller returns under other circumstances: 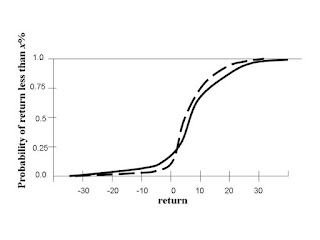 A genuine gamble is one that most likely will lose money but for which there is a smaller probability of a large win: 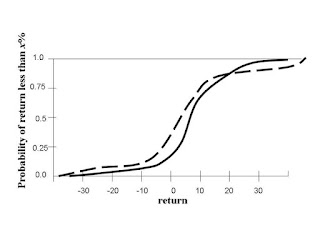 Of course, real proposals will often involve complex shifts in the probability distribution, giving them aspects of both increasing and reducing risk: 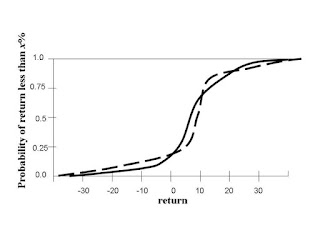 To regulate effectively the risk management practices of financial institutions, one must distinguish between the sorts of risks that can be taken: