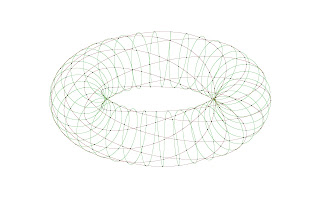 Here is an image of a torus with a square lattice drawn on it. This lattice is formed by the intersections of two helices drawn on the torus. There are many ways to draw such helices on a torus, and the lattice pattern emerges from the combination of two such helices. This kind of double helix square lattice on a torus is a broad family of geometric shapes.

This kind of geometric shape can be used in music several ways. It can serve as a model for the time evolution of a piece of music. It can also serve as a model for the harmonic relationships between the pitches used in music. Since music is, in large part, a relationship between time and pitch, a piece of music can be modeled as a relationship between two different toruses, a torus of time and a torus of pitch. Of course most music won't fit this model very well or at all. But it can serve as a blueprint for creating music.

Musical time as a helical path on a torus... maybe it's because I have been thinking this way for decades, but it seems quite natural. Of course a piece of music often has more of an arc structure, a beginning, a middle, and an end. But often within that large arc, whole stretches are largely repetitive, where the end of each repetition joins smoothly with the beginning of the next. If the repetitions were exactly the same, this would simply be a circle. But perhaps the words of verses change or other details, so each repetition is slightly different than the last repetition. To bring the last repetition close to the first repetition is of course a more arbitrary choice, but not a very wild one. I hope this makes sense of the notion of musical time as a helical path on a torus.

The idea of pitches being related harmonically in a way similar to a helical lattice on a torus... this is hardly a new idea in the world of music theory. There are many ways to use this kind of geometric shape to represent harmonic relationships. The circle of fifths is the most basic. Major thirds are another fundamental relationship between pairs of pitches. These two intervals then create a mesh of relationships that can be laid out on a torus: 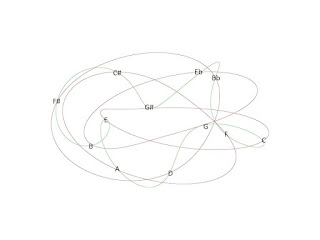 Here the green line traces the circle of fifths. There are four red loops, representing the circles of major thirds. 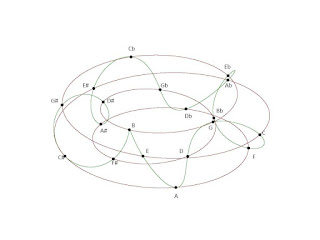 The green loop here again represents the circle of fifths. What's more interesting is that major thirds no longer divide up the pitches into separate loops. Instead there is one large loop traversed by major thirds.

With these two toruses and their helical lattices, the harmonic structure of a piece of music can now be mapped out. For the most part, one would expect phrases that are closely related in musical time to be closely related harmonically. There might be abrupt transitions, but they make sense in this approach in the context of surrounding smooth relationships.

The simplest non-trivial mapping uses a loop on the pitch torus, some path through the lattice that returns back to the starting point. This loop is then traversed in musical time. It could be that each repetition traverses the loop. Or perhaps the repetitions don't move much internally, but each repetition moves slightly relative to the previous repetition, so the harmonic loop is traversed over the course of the whole piece.

Algebraic topology is the mathematical discipline where these sorts of smooth mappings are enumerated. Mapping a torus onto a torus is a rather elementary problem in algebraic topology... but there is still a rich variety of possibilities to be explored musically!

One natural step in extending music into wider worlds is to introduce yet another basic interval, governed by the frequency ratio 7:4. This extra relationship makes the torus of harmonic relationships much more difficult to draw... it's not anything that could physically exist in our three dimensional world. But of course mathematically it is nothing very complicated to manage. A tuning that can represent this new interval quite accurately, along with the more conventional intervals, is 171edo, the tuning that divides octaves up into 171 equal steps.

An instrument with so many notes would be physically unwieldy. But with a software synthesizer and algorithmic composition, it is not so hard to build a piece of music based on a mapping of this more complex torus onto a torus of musical time: