I see that the Yamaha CP1 electronic piano can be switched to play in Pythagorean tuning. This means that fifths are true, i.e. a frequency ratio of 3/2. This is about 2 cents sharper than an equal tempered fifth - a cent is 1% of a half step. Of course, if you follow the circle of fifths and every fifth is 2 cents sharper than equal tempered, the circle will not actually close. The last fifth must be 22 cents flat! Thus, the Pythagorean tuning can be diagrammed with: 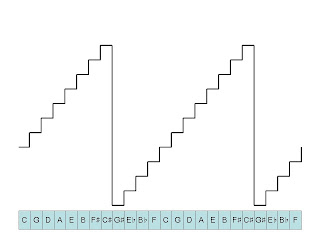 I don't see in the CP1 manual which fifth they chose to be flat, so I just took a guess.

One approach would just be to shift the whole diagram over a fifth - to keep the same set of differences from equal temperament, but just to shift the assignment of those differences a fifth. This can be diagrammed with: 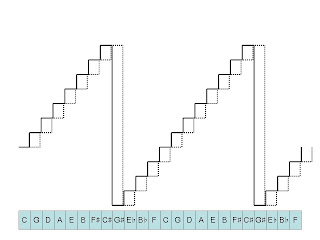 This is clearly not very satisfactory. Every note on the piano gets adjusted - most notes a flattened two cents, but then one note is sharpened by twenty two cents. This global shuffling could be disruptive in the middle of a performance.

Another approach is simply to sharpen a single note by twenty four cents: 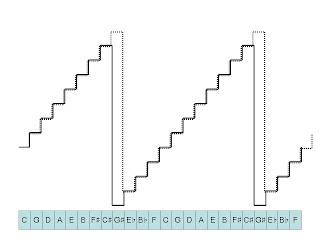 The great advantage of this approach is that, when shifting the flattened fifth one step around the circle of fifths, only one note is changed: the eleven others are left unaltered. This should eliminate any sense of disruption during a performance.

However, with this approach, the whole set of differences from equal temperament drifts sharp by two cents. Shifting again and again in the same direction would just keep sharpening the tuning of the piano. But that is the nature of real Pythagorean tuning: the circle of fifths just doesn't close!

Of course the performer would also have the inverse option, to move the flattened fifth back in the circle of fifths. Again eleven note are unaltered, and then one note would be flattened by twenty four cents.

It looks like this approach to dynamically shifts for Pythagorean tuning could be implemented naturally on the Yamaha Motif XS synthesizer, using the stock tuning controls.

Step one is just to work with Pythagorean tuning, to explore the musical value of the just tuned perfect fifths, and then to see how that awkward very flat fifth gets in the way. Then one can start to explore how dynamically shifted tuning allows one to push the piano past its usual limits - it's as if the piano actually has more keys than twelve per octave!
Posted by JimK at 2:23 PM No comments:

Tuning a keyboard instrument such as a piano so that each half step has exactly the same frequency ratio is the tuning system known as equal temperament. In equal temperament, a sequence of notes can be shifted up or down the keyboard by any number of steps, and the harmonic relationships between the notes will not be changed. This symmetry is a big advantage for equal temperament.
As discussed by Kyle Gann, there are subtly different tunings that have some other advantages. The fundamental problem with equal temperament, or really with any tuning system, is that the mathematical ratios underlying harmony can be combined in an infinite variety which would require densely packed notes infinitesimally spaced, if the mathematical ratios were to be represented precisely by the tuning system. For a tuning system to provide only a manageable set of notes to a performer, some or all of the intervals will have to be adjusted, or tempered.
Any tuning system that is not equal tempered will not be symmetrical, by that very inequality. A sequence of notes will sound somewhat different if it is shifted up or down the keyboard. For example, the fifth from C to G might be slightly different than the fifth from E to B. A musical piece will have a slightly different character when transposed to a different key.
This variety of character opens up an interesting musical possibility. Given modern keyboard technology, the pitch of any note on a keyboard can be shifted slightly in an instant. To change the character of a piece of music, one could leave the music in the same key, but just tweak the tuning of the instrument on the fly, during a performance.
This is analogous to an orchestral harp. A harp has only seven strings. One can use the pedals of the harp to sharpen or flatten strings, one pitch class at a time, so the harp can be played in the different keys. My proposal here is to take a keyboard that can has twelve pitch classes available, and to use a pedal, or perhaps hand operated controls, to shift one or more of those twelve pitch classes slightly sharper or flatter, to make available multiple non-equal temperaments during a performance.
Here is one concrete proposal for a set of operations to shift tunings. Studying Kyle Gann's presentation of Young's Well Temperament from 1799, one can see that the deviation of the pitches of the various notes from equal temperament follows a simple pattern when plotted along the sequence of fifths: 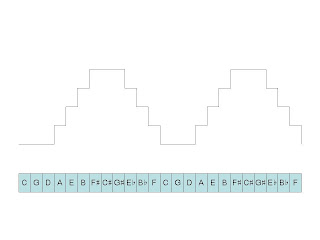 Typically one will want to shift the meanings of the notes, the harmonic structure, by a fifth. One could just shift the tuning pattern directly: 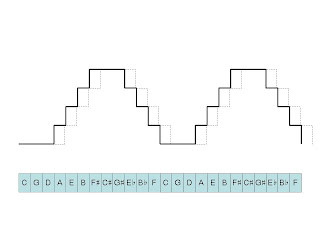 This shift leaves four pitch classes unaltered, sharpens four, and flattens four. One problem with this shift is that the four unaltered pitch classes are in two separate pairs. Musically, probably only two are significant at any time.

One can also provide two alternatives: shifting up 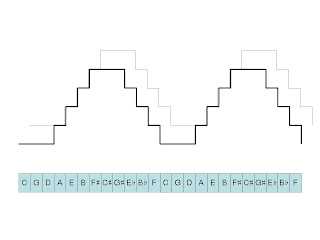 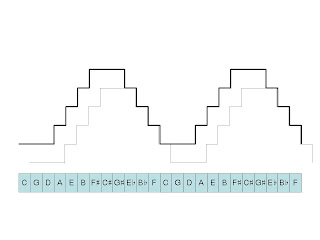 A complete system could provide these three alternative shifts when moving up a fifth, and the corresponding three when moving down a fifth, for a total of six single step possibilities. Each step could be repeated indefinitely. Shifting over repeatedly would bring one back to the same tuning after twelve shifts. Shifting up or down repeatedly would keep sharpening or flattening notes, so the whole tuning would be drifting up or down in pitch. Of course, a more typical usage would likely be to shift up when moving a fifth in one direction, then to shift down when moving a fifth in the other direction, which would return the keyboard to the starting tuning.
Posted by JimK at 3:54 PM 6 comments: