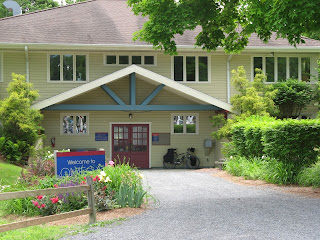 This past week I attended a Dharma Teacher Gathering at the Omega Institute in Rhinebeck. That's close enough to home that I could ride my bike to get there and back, which was delightful! I think the last time I was at Omega was in 1990. The place hasn't changed so much over those years... the food is still great!

The gathering included around 240 teachers. It was really an amazing group of people! During the various sessions there were many opportunities for small group conversations and explorations, and of course many more during breaks and meals. I had only met previously a few of the attendees, so the week was just packed with discovery! Most folks were from the USA but also quite a few from Canada and Europe. I think most people came from big cities. The largest contingents seemed to be from the Triratna and Insight Meditation organizations. There were also many teachers from various Zen lineages. Hard to be sure but I think the number of teachers from Tibetan traditions was probably around twenty. But one interesting facet of the group was the way folks participated in multiple traditions. For example, a Zen teacher from Toledo, Ohio told me how he was also teaching Lam Rim, having studied with Gelek Rinpoche. Or a teacher from a Japanese temple in California was also working with Chetsang Rinpoche from the Drikung Kagyu tradition.

With such a short meeting bringing together so many teachers from so many traditions and also covering such a wide range of issues, we could never explore very deeply. But perhaps the point of this kind of meeting is just to start conversations. Certainly doors were opened on important topics!

Our first day was on "Growing as Teachers". I think of myself primarily as someone who practices the Buddha Dharma, or at least I try to keep my practice as a top priority. The teaching I do is a part of my practice, in part a way to practice generosity, but even more a kind of mirror in which to discover my limits and inspire my further efforts to let go of my own rigidity, delusion, etc. So my inclination was to interpret the topic of the day more as "Growing as a Practitioner". Either way, a challenge with such a topic is to establish some kind of reference framework in which growth can be measured or evaluated. The challenge of setting up such a framework came up, too, in several meal-time conversations.

Over the years, I have talked with folks interested in a scientific approach to Buddhism. Can't we measure the processes of the mind and use those measurements to refine our methods of practice to make them more effective, to become better able to liberate ourselves and all beings? How can that not be a worthwhile project and even an urgent project?

But maybe the project is not as straightforward as we'd like it to be. Frameworks of reference have their use, but every such framework casts shadows even as it illuminates. This is the nature of relative or conventional reality. This nature is, indeed, the ultimate reality, the realization of which liberates us. The project of measuring our progress toward liberation is entangled with deep paradox. And of course Buddhist literature is filled with expressions and exploration of that paradox. Frameworks are constructed and deconstructed with amazing alacrity.

Our modern age is characterized by large scale bureaucratic institutions. Probably religious institutions have the longest track record for such bureaucracies. How can all the rules and procedures serves to enhance the effectiveness of the institution, instead of serving to rigidify and corrupt? What resources does Buddhism have to help tackle this problem generally as well as for the institutions that embody the Buddhist tradition itself?

Our second day was was focused on the issue of diversity. This issue was framed primarily in terms of the polarity between white and, uh, PoC, People of Color. (This whole business of ethnic, national, racial, etc. identity - and labels! - it really is problematic. No doubt there is value in identity at a relative level. But all the politics! Violent battles over labels! Wow!) In one presentation one question was resolved, something that has puzzled me for years. Why are white people called "Caucasian"? What is the link between white people and the Caucasian region, between the Black and Caspian seas? White people seem to come from Northern Europe, which is not so close to the Caucasus.

Apparently, back in the eighteenth Century when the first anthropological theories about race were being formulated, a very large old skull was unearthed in the Caucasus. Such a large skull must have come from a superior human. Since white people are superior, that skull must have been from a white person, and so white people must have come from the Caucasian region. Whether or not the white-Caucasian link really started with this bit of history, without a doubt commonly held ideas very often start from such odd accidents and then somehow snowball and stick.

The strange paradox here is that the polarity between white and PoC is really a product of white supremacy thinking. It is certainly a polarity that needs to be confronted. We have to take our ideas seriously in order to examine them thoroughly so we can see their limits or their utter delusiveness. But in Buddhist institutions, the connections between race and power are particularly diverse. The notion of race and the white-PoC polarity, these are products of European and Euro-American thinking. Buddhism developed quite independently of any of that. Of course, most every society has some way of dividing up people into groups that tend to track along family lines, and power tracks within group boundaries. These boundaries get scrambled across history: Buddhism can provide many examples of this kind of scrambling, as well as method for understanding the scrambling.

Certainly in the USA today, the white-PoC polarity still has great weight. Addressing the suffering that creates is both a challenge and an opportunity for Buddhism here today. I do wonder if stepping back and seeing the broader picture might not be useful in meeting that challenge. Then again, my typical pattern is stepping back and avoiding intimate engagement, so perhaps I am just avoiding a real confrontation with my own white privilege!

Our third day was devoted to "Responding to the World's Needs". There was some discussion about the spread of Mindfulness cultivation beyond Buddhism, but at least for me the topic of high impact was climate change. We heard some very frightening figures on carbon dioxide and methane emissions. On the other hand, we were encouraged to be confident that a solution could be found if the appropriate will could be summoned to the task.

I had volunteered to lead a breakout discussion on how Buddhism might address this challenge. Putting together an outline for the discussion did give me a good opportunity to think through many aspects of the topic beforehand. I was hoping to hear and learn from other participants, but there were so many other fascinating breakout sessions... oh, well!

I do think, though, that Buddhism has a tremendous amount to offer here, a middle way between the extremes of a solution and an apocalypse. Just as reflection on the inevitability of death can serve to inspire a deep sense of responsibility, contemplating the profound disruptions the world will undergo as the encounters with resource limits accelerate can help us see how our actions now are of crucial import for future generations.

With so much left to explore, I hope such gatherings of teachers can continue to dig deeper and keep our various institutions vital, to benefit both their own memberships and all sentient beings!